The ability to do a lot of pushups may be a sign not only of strength, but also of good heart health, a new study suggests.

The ability to do a lot of pushups may be a sign not only of strength, but also of good heart health, a new study suggests.

The study tested the stamina of middle-aged male firefighters. It found that those who could do more than 40 pushups in a row had a 96 percent lower risk of being diagnosed with heart disease or experiencing other heart problems over a 10-year period, as compared with those men who could do fewer than 10 push ups.

However, because the study looked at only male firefighters, who have very active jobs, it's unclear if the findings apply to average Joes. [9 New Ways to Keep Your Heart Healthy]

But the findings suggest that "pushup capacity could be an easy, no-cost method to help assess cardiovascular disease risk," study lead author Justin Yang, an occupational medicine resident at the Harvard T.H. Chan School of Public Health in Boston, said in a statement.

The study was published Feb. 15 in the journal JAMA Network Open. 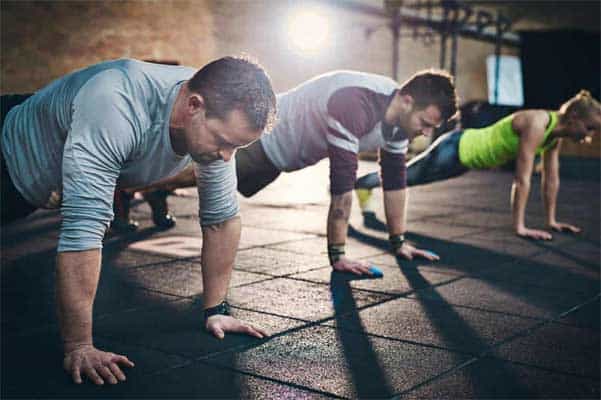 Physicians know that being physically fit is linked with better heart health. But it can be difficult for doctors to accurately assess a person's fitness level during a routine visit. Doctors sometimes use "treadmill tests" to evaluate a person's fitness level. In these evaluations, people run on a treadmill until their heart rate reaches a certain level. But the tests are time-consuming and require expensive equipment, so they aren't done routinely.

The new study tested whether a simple exercise like a pushup could provide clues to heart health. To find out, researchers examined records from more than 1,100 Indiana firefighters (with an average age of 39) who underwent a pushup test at the beginning of the study. The participants were then followed for a decade to see if they experienced a cardiovascular event, such as a diagnosis of coronary artery disease, heart failure or cardiac arrest.

However, the researchers cautioned that pushup capacity is not necessarily an "independent predictor" of heart disease risk. That is, there may be other factors tied to heart disease risk that are also related to how many pushups an individual can do. Such factors could include a person's age, body mass index (BMI) and aerobic fitness level. But, in general, pushup capacity could be an indicator of overall fitness, the researchers said.

"This study emphasizes the importance of physical fitness on health and why clinicians should assess fitness" during doctors' visits, study senior author Stefanos Kales, a professor in the Department of Environmental Health at Harvard T.H. Chan School, said in the statement.

More research is now needed to examine the link between pushup ability and heart disease in the general population, including among women and less-active men, the researchers noted in their paper.
See Full Article: Pushups Men Heart Health
By: Rachael Rettner

We help our clients build Winning sales teams by attracting the best Sales Talent in the country. We specialize in bringing our customers top performing Sales candidates that will make a difference in driving growth and outperforming the competition.

David Bagga is the country’s leading medical Device Sales Recruiter and Coach, ranked in the top 1% by LinkedIn.

Contact us to discuss your recruiting needs or if you would like to grow your career in the exciting field of Medical Device Sales.